My Story of Thanks

I never imagined that going completely deaf and losing everything I owned would turn out to be the best things that ever happened to me. What seemed like a great tragedy that would lead to empty and joyless life ended up making me far more successful and happier than I ever imagined.

For the past seventeen years, I have written a column at this time of Thanksgiving to tell my story and to offer hope for those that are dealing with struggles and difficulties that may seem insurmountable. I didn’t think it was possible for me to overcome the obstacles that I faced, but faith, optimism, and persistence can have miraculous results.

Back in the early 1990s, I earned law and business degrees from the University of Michigan. I passed the CPA exam and was working hard to establish my own corporate and tax law practice in Ann Arbor, Michigan.

One bright and sunny summer day I was talking on the phone with an IRS agent trying to settle a tax shelter case for a client. I was close to finalizing a pretty good deal but I could not understand what the agent was saying. I was rapidly going deaf and could no longer talk on the phone effectively.

I had suffered from some hearing loss due to genetic reasons for most of my life but it had never really been a major hindrance. It would embarrass me at times when I misheard things, and I’d try to avoid courtrooms and noisy places with poor acoustics, but I had been able to deal with it quite well up to that point. However, my hearing loss had deteriorated to a critical point and ordinary conversation was becoming a challenge

I consulted various doctors and tried hearing aids but there was no cure. Soon after, I was totally deaf. I could read lips a little and hear very loud sounds but the only way I could communicate with most people was by written note.

Practicing law is tough enough in normal circumstances, but it’s impossible when you can’t communicate with anyone. I soon closed my law practice and lost everything I owned. Not only was I broke and without a job, but I was recently divorced as well.

Helen Keller once said that being deaf was worse than being blind because deafness isolates you from people. I came to understand that well. I was unable to have even simple conversations. I was lonely, greatly depressed, and had no hope that the future would be any brighter. Luckily I had a small disability insurance policy that provided enough to pay my rent and put food on the table, but what in the world was I going to do with my life?

Just having some personal contact was a great relief, but what really changed my life was that I eventually stumbled across some message boards dedicated to the stock market. I had taken a few investment classes in business school and was familiar with basics like model portfolio theory, discounted cash flows, and various valuation approaches, but I knew nothing about active trading, technical analysis, or psychology. I was surprised to find folks online actively trading stocks who weren’t worried about all those things that were so important to my professors in business school.

I was fascinated and was soon reading everything I could find about trading and the stock market. I had a very small amount of money in an IRA and was anxious to see if I could make some money in the market. There were no online brokers at the time, and since I couldn’t talk on the telephone, I would drive over to my broker’s office and tell him what trades I wanted to make.

I struggled at first as I tied up money in slow-moving big-caps that did nothing, and I got stung by small-cap frauds. Eventually, I started to have a little success and made a few hundred dollars on some small trades. The more involved I became in the market, the more I came to understand that the secret to success was to focus on emotions, psychology, and price action. Fundamentals didn’t matter until someone decided that they did — and that was the time to start trading a stock. What worked for me was to understand the mood and to run with the crowd as it became increasingly emotional.

As my little stake slowly started to grow, I gained confidence and developed some basic rules for my trading, especially when it came to protecting capital. Eventually, real-time quotes, online brokers, and charts became readily available, and I had all the tools I needed to actively trade. I had nothing else to do with my time and I could not afford to lose a penny, so I dedicated myself to the market.

I started having my first real success in 1993 and 1994 as I traded stocks like II-Vi, Inc. (IIVI) and Wireless Telecom Group (WTT), which doubled and tripled and split very quickly. I soon came to understand the power of momentum and actively studied the CANSLIM approach used by William J O’Neill, the founder of Investor’s Business Daily.

The late 1990s turned out to be the ideal time to be an aggressive small-cap momentum trader. My small stake soon doubled and tripled. In 1998 my income from trading was more than 10 times the stake I had started with a few years earlier and it continued to multiply after that.

The bubble days of 1999-2000 were like a gold rush for traders, but I stayed extremely disciplined and appreciated the fact that it wouldn’t last forever. My struggles with deafness had helped me cultivate a stoic and calm approach to the market that served me well. I was conservative and always focused on protecting capital. That may have cost me some profits on the way up, but it served me well when the crash occurred in 2000-2001.  After some volatility, my accounts were still near all-time highs as the market underwent a downtrend that lasted years.

I greatly enjoyed discussing stocks online and debating the best trading approach. I had great debates with the Motley Fool on America Online, particularly about their claims that active trading was a suboptimal approach.

I debated the merits of trading Iomega with Herb Greenberg. Herb, who is a great pro, enjoyed my aggressive and insulting posts, and he asked me to operate an active trading site with him on AOL. The site was called Shark Attack, and we operated the first real-time chat room dedicated to trading. Members would stake out one of the limited spots hours before the market opened. I am very proud that the site still operates over 20 years later with many of the original members at SharkInvesting.com

Shortly after 9/11, I asked Jim Cramer if he would allow me the privilege of writing a few comments from Real Money. He welcomed me with open arms and I’ve been writing there almost every day since then.

In 2007, I published a book called “Invest Like a Shark: How a Deaf Guy with No Job and Limited Capital Made a Fortune in the Stock Market” after an editor from FT Press read my Thanksgiving column.

The stock market had become my life and it was completely by accident. I loved it so much, it never seemed like work. But even more fulfilling was that I had met a special woman while visiting my parents’ vacation home in Florida. We developed a rudimentary form of sign language and I was finally able to share life with someone who cared. Our three children are homeschooled and are accomplished pianists and athletes. My daughter who was just born when I start writing for Real Money is starting college soon.

Technology not only allowed me to become a stock trader, but it also helped me to regain my hearing to some degree. A few years ago, I had cochlear implant surgery, which basically gave me a robotic ear. It gave me imperfect hearing but it was good enough that I could carry on a conversation without the pad of paper I used to always carry with me. Today I am at Baptist Hospital in Winston-Salem, NC having the newest cochlear implant technology programmed so I will be able to hear even better.

The point of writing this story is to express my gratitude and to let you know that if I can be this lucky and blessed, it can happen to you too. I know what it is like to have a feeling of hopelessness and despair in my gut. You will defeat it and it really is true that the Lord works in mysterious ways.

Everyone faces challenges in life, and it is very important to not give up. Right now, many are struggling with a very tough stock market but I know – without a doubt – that there are great opportunities around the corner. Stay positive and keep on plugging away. Life has an amazing way of working out and optimism hastens the process.

I’m very thankful for what has been given me. The best way I can show my appreciation is to better love all the people who have encouraged, helped and supported me over the years. I hope that my writings will be able to assist you in some small way in your market endeavors.

Have a great Thanksgiving!

P.S. If you haven’t had a chance yet, I’d like to invite you to download a free copy of my ebook, “RevShark’s Essential Guild to Market Success.” It is a short book that outlines some of my market philosophy and basic trading principles. 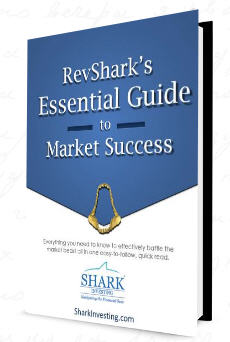 Stock of the Week

Sign up to receive RevShark's FREE Stock of the Week

Please check your email to confirm your Subscription